Why this cyclist's $651 ticket makes no sense 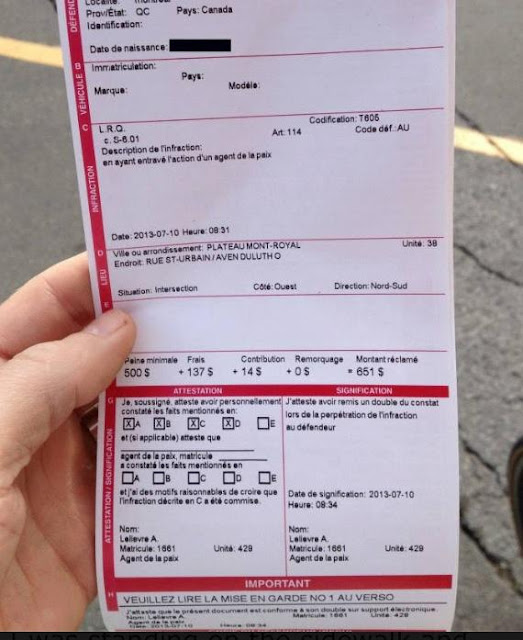 Yesterday Chris Lloyd was given a $651.00 ticket for warning other cyclists that there was a police trap at an intersection. I'm not only disgusted at this because of the obvious over exaggeration of the charge, but this is also the most backwards approach to public safety/ keeping people safe I've ever heard of.

Let's break it down;
The police are there to enforce the laws because there needs to be order and safety on the streets. Right? Okay, so cyclists need to obey the laws in order for this order and safety to be maintained. Right?
I get it.
Is every cyclist breaking the law?
No.
So how did Chris Lloyd actually interfere with the police doing their job? Their job at that moment was to give tickets to those breaking the law. Right?
So for him to interfere with their job means they knew something he didn't or their job was different than that of ticketing those breaking the law or public safety and education.
There's no way of knowing whether or not the cyclists Chris told about the trap, were going to break the law.
So how did he "interfere with their job" exactly? Oh that's right, because they didn't want to help keep people safe, their JOB was to ticket people at high volume in order to bring in some cash.

The Police giving a ticket to Chris perfectly illustrates what kind of motives the police had with their trap and I can't help but feel this is even more of a sting given that recently, the SPVM agreed to go easier on cyclists and not ticket them as aggressively.

And let's say that it's an intersection that seems to have a high volume of cyclist infractions, why not spend the time finding out why and fixing the infrastructure so it stops happening? Tickets don't solve problems, they only bring attention to them. No one feels educated with a $41 ticket in their hand, they feel frustrated. Most people have good intentions. I don't know anyone who wants to be dangerous and put other people's lives at risk

I am not here to argue whether cyclists should be ticketed or not. I'll take a ticket after blowing a red light with a smile. However,this type of interaction with police  is not about telling people what is or isn't safe and making public space better for everyone, it's about telling people to shut up when they know what is right and moving to the side so that "business as usual" can run smoothly.

I think it's a shame considering that we've come so far here with our cycling battles and that Montreal has entered a new age of being even more of a cycle-friendly city. When I see this type of thing, I think to myself " What could we actually be doing with our time, money and ressources?" I can personally think of a few intersections that could use some maintenance and attention and would actually do more for public safety than any ticket would do. Maybe instead of stationing police to set traps, the city should station pick up trucks full of asphalt and people with shovels to fix pot holes.

This insane and disproportionate behaviour needs to stop and I'm glad Chris went to the media about this because these things are unacceptable and don't help anyone or anything but the city's bank account.