So I roll up to the ambulance and CLUNK, CLANK, CLAK, I get raised up into the back. I am followed by one of the officers and she says goodbye to the ambulance worker. She turns around and it hits me. She interrogated the man in the Honda but did not ask me my side of the story.

"Ummm, excuse me, aren't you going to ask me my side of the story?"

She stops and sits on the bench inside the ambulance and says,
"You were coming from the south, he was coming from the north and made a left turn. You collided with the rear passenger door."

I agreed and she left.
My phone continued to ring in my pocket so i asked the ambulance worker to take it out and place it in my hand. I was strapped down so could not raise it up to my ear or even flip it open . I started to shoot the shit with the ambulance worker and I told him that I was a bike messenger and I had my own business and that I was on my way to Laval to drop a call before the day started downtown. He was generally interested and was impressed with my job. It felt like time was going by really slowly. I could not tell what street we were on. As far as I knew, we were going to the general hospital, so i was a little bit surprised when we arrived at Jean Talon Hospital.
No comments: 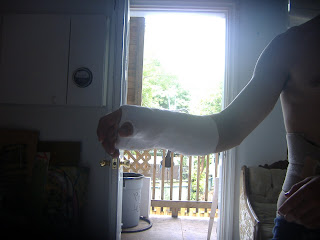 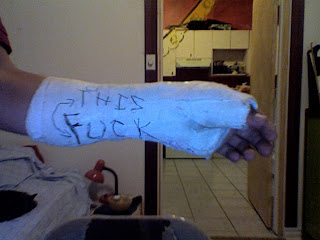 So I was sitting there with a nice crowd of people around me. A few passers by had their opinions on the situation and were making them heard. One of those opinions was to summon a cop car parked in the nearby gas station, but before we had a chance to, it started its engine and left. Driving right past us. Everyone at the scene was completely in awe. My emotions were going crazy by this time. I started to feel really sad, down and afraid about what was going to happen next. I began to cry. This was no ordinary crying. No, this was the type of crying that looks forced and aggressive. It was completely uncontrollable for about 2 minutes. A short while after my crying fit, a fire engine arrived. It was obvious that the women at the other end of the phone didn't understand the situation at hand. Firemen descended their big red truck and proceeded to put a neck brace on me. Quickly afterword, the police car that had left the scene, came back. Once again, I was in complete awe. I think that I was the only one to get a look at the officers as they fled the scene because it seemed I was alone in feeling this. They were two female officers who were very friendly and seemed generally concerned with my well being. This experience differed from my other encounters with police. Finally, the one vehicle that was needed showed up. The ambulance pulled up onto the sidewalk and two hefty men descended. They approached me and asked where the pain was. I showed them the bump in my hand and I told them my shoulder was hurting.In thick Quebecois french they asked if i had any pain in my neck or head.

Cam
"No, my neck feels fine and so does my head."
Ambulance worker
" Can you tell me what day it is and where you are?"
C
"Yes, August 20th, we are in Montreal Quebec on Acadie street."
A.W.
"Okay, we are going to immobilize you please stand up."

Before I entered the ambulance I wanted to make sure that my bike wasn't going to be left on the sidewalk. The officers offered to bring it to the station. Initially i said no, but i quickly changed my mind considering the situation.

The ambulance workers took out the spine board and asked me to lay down on it. They strapped me down to the board and then lifted me up onto the stretcher.

"1, 2, 3 heuuuuuuuuuuuu!"
Click, click,click. I herd more straps being tightened and fastened. While this was happening i felt my phone vibrating in my pocket. I guess the messages i left on my client's and girl friend's voice mail weren't the best idea. The officers had finished interrogating the man in the Honda and he approached my stretcher. My injured hand was resting on my stomach and presumably in an act of affection and concern, the man tapped my hand while saying "Good luck buddy."

Extreme rage and pure anger entered my body. I screamed at the top of my lungs,
" Fuck, fuck you! Ahhhhhhh fuck, jesus christ!"

I wanted to get in the ambulance asap.
No comments: